This article is over 1 year old Airbus is celebrating after the world’s longest commercial aircraft made its first landing on Antarctica’s continental shelf. The A340-500 superjumbo touched down at the Von Braun station,… 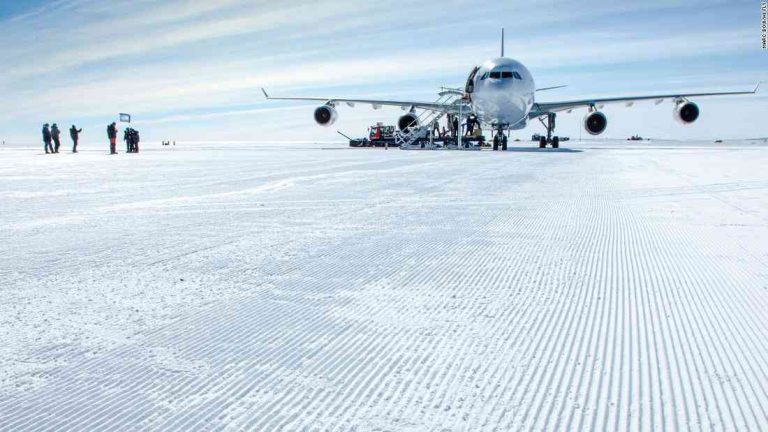 This article is over 1 year old

Airbus is celebrating after the world’s longest commercial aircraft made its first landing on Antarctica’s continental shelf.

The A340-500 superjumbo touched down at the Von Braun station, about 600 miles (965km) from the South Pole, on Sunday on a flight from Paris.

Images from the flight show its wings laden with cargo containers.

After landing on ice the plane continued on its way for a three-hour flight south to land at Von Braun station on Commonwealth land.

Airbus said it had flown scientists with two other planes to conduct weather testing, and that it was also working with the Commission for Antarctica to help it move more equipment onto the mainland.

The Airbus A340-500 arrived at the Von Braun station after a journey of around 8.5 hours from Paris. Photograph: Kim Doohan/PA

The Airbus A340-500 has a capacity of 546 passengers and can fly its crew in first-class. It is the largest commercial aircraft in the world and Airbus says the aircraft has a range of more than 10,000 nautical miles (19,600km).

In August 2014, the airframer called off an A340 test flight into Antarctica’s Solwhit airfield in one of its worst aviation disasters in its short history. The flight had been due to carry a top leadership team including Airbus chief executive Tom Enders, who was in the cockpit.

The plane disintegrated in mid-air during the test flight, killing the four pilots and an Italian technician who had helped to prepare the passenger jet for the voyage.

The accident followed the 2009 crash of an Air France flight that went down over the Atlantic with 228 people on board in what was subsequently judged to be the most severe accident in the airline’s history.