Tiger Woods: ‘I am getting closer’ to competitive comeback

Image copyright Getty Images Image caption Woods has played in only four tournaments since August 2014 Tiger Woods will not have his number on his plate during the rest of the season, but it… 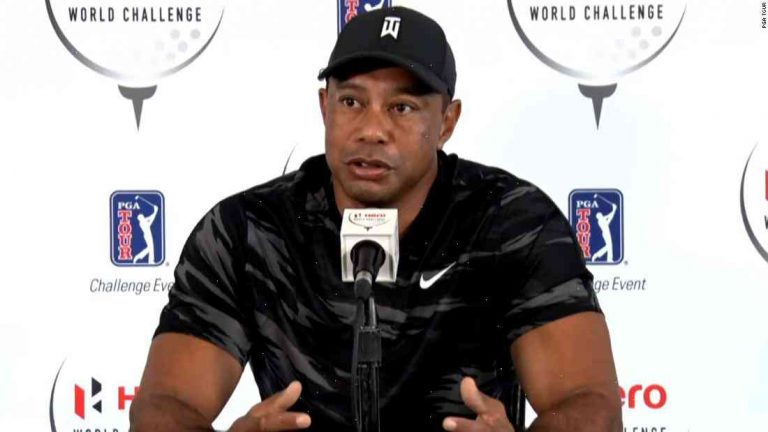 Tiger Woods will not have his number on his plate during the rest of the season, but it could be this year.

The 14-time major winner, 41, is optimistic he can be competitive again at the PGA Tour’s Quicken Loans National in Maryland, on 26-28 July.

But for the first time since 1998, the Memorial Tournament on 17-18 June, and the US Open the following week, he will be absent.

“I don’t know when that is going to happen but I am getting closer,” he said.

Woods’ event at Congressional Country Club is his final chance to cash in on his decision to return in January, rather than having to wait until 2018.

While he is not expecting to hit the form that made him the world number one in 2009 – back surgery this year means he has played only 16 competitive rounds since August 2014 – he says he is “thrilled” by the thought of adding to his major tally.

“I am ready to play golf again,” he added. “I’ve been playing a lot of golf, so there is no reason I can’t still play at a high level. I am just going to have to play well and see how it goes.”

So how close is Woods to competing? He wants to play in the Texas Open next week, the Honda Classic two weeks later, and on the following two weeks.

“I like what we are doing. We are excited about the direction we are going in. I am getting better and it’s something I’ve never felt like I’ve had in my career.

“We’re getting good at it,” he said. “I’ve done so much work in the past few months that I don’t need much time in between (tournaments) to get myself right and ready to compete.

“That was a big thing for me to get to this point.”

Woods had said that he did not plan to play further in 2017, but it appears that will no longer be the case.

Woods’s swing may still be heavily criticised, but he also has someone to tell him.

“The assistant coach,” he quipped. “I am working very hard with him.”