Toronto streets will be closed through the majority of winter to help complete construction work on the $7.8bn Ontario Line Crosstown LRT. The 10.3km transit line is expected to open to riders in 2023…. 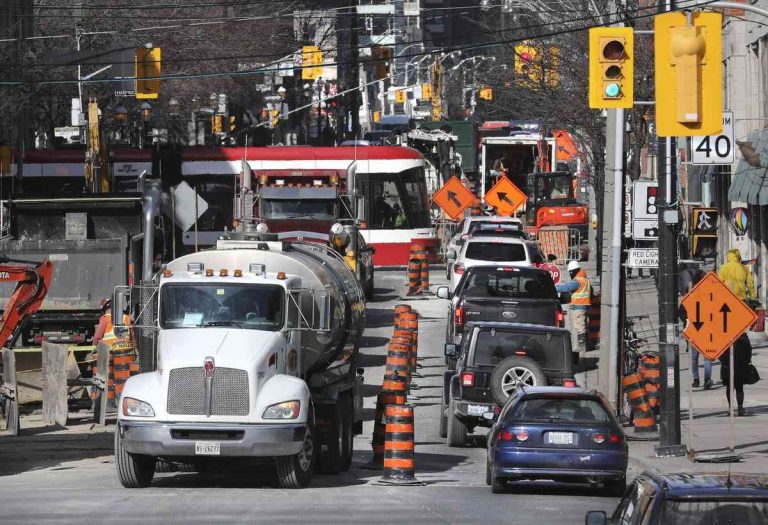 Toronto streets will be closed through the majority of winter to help complete construction work on the $7.8bn Ontario Line Crosstown LRT. The 10.3km transit line is expected to open to riders in 2023.

Just as Expo 67 made the streets of downtown Toronto sweltering hot, at least seven years of traffic detours and construction delays – of up to 30 minutes – are expected in the area once the light rail line opens. So far, construction work on a highway overpass has moved one route along the University of Toronto to total closures.

One of the new streetcams dedicated to the Crosstown:

The Line is considered a crucial step in Toronto’s efforts to ease congestion. After the line goes online, dedicated bus lanes on Bloor Street and Jane Street – renamed Highway 401, as part of the project – will open to buses. But how will drivers still manage to get around downtown and on their way to work in Toronto?

Here’s how things will play out:

This is going to be tough on commuters, and the city is being super-aggressive about trying to make it work. But before the project wraps up in 2024, plan accordingly. Those wishing to avoid lengthy delays can still seek out a new route on Bloor, Jane or Queen streets.

How about Port Lands?:

Transport Canada won’t permit construction of any transportation system up to 300 metres across the mouth of the Port Lands unless local residents and public safety officials give them a thumbs up. To clarify, the plan to build the Ontario Line west of the Royal York Hotel was to use a tunnel – but this got scrapped.

But I’m with the people of Toronto, who voted overwhelmingly against this line’s route when it was first introduced back in the 1990s, after the city decided to use private funding to build it. If you’re still not convinced, consider what they said to BCA in 1993:

The contentious underground plan is something of a missed opportunity and sends a confusing signal about the political and financial priorities of the city. The $2.9bn that would have gone into the project had it been wholly privately financed would have been better invested in other projects.

It seems a bit petty to whip up this debate in advance of an LRT launch – but if you’re looking for a politically motivated reason, look no further.

Ultimately, this should have been designed as a passenger-first project. The only way to ensure that it is successfully operated is to avoid the worst of this plan and right the wrongs committed in the name of convenience and gain.

Which is why I’m calling for the government to adhere to the recommendations of an independent advisory committee and consider reopening the debate. Don’t get me wrong, the LRT is all well and good. But the city of Toronto will be better off to leave this controversial route alone, with the MTA not responsible for it.

It is possible to plan better for the long term than to build megaprojects in haste – if they are designed for use in the future, as opposed to being a last-minute replacement for inadequate transportation networks.