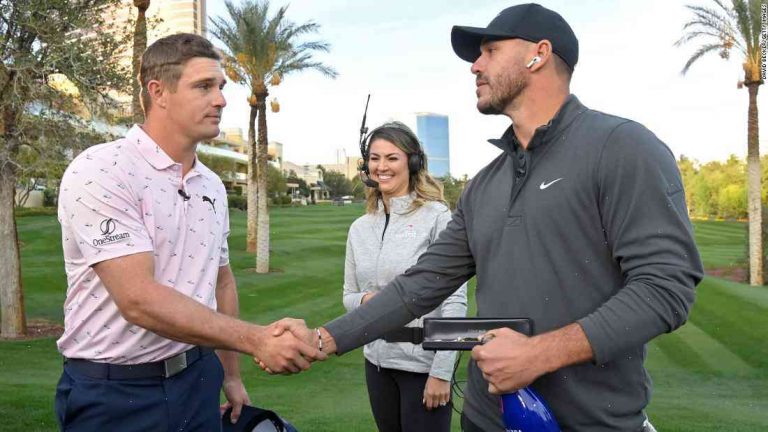 US Open champion Brooks Koepka says he “just wanted to spank” Bryson DeChambeau after beating the fellow American in “The Match”.

Koepka, 26, beat DeChambeau in a best-of-18, final-hole playoff to win the inaugural celebrity tournament in California.

“I told (DeChambeau) I was not going to lose. I just wanted to spank him,” said Koepka, who beat Anthony Kim in the final on Sunday.

“I was tired and it was fun. I really hope he learns from this.”

Koepka also revealed he paid his partner and little league team more than $1,000 (£719) for a football game with DeChambeau.

He added: “I said, ‘You can make this (even) a bigger story than it already is’.

“He played a complete game. I’m going to make sure he continues to play really well. I don’t know why he’s always expecting me to beat him by 20 shots. I just wish he would just be competitive.”

Kim, who represented both the USA and Canada in golf, was diagnosed with cancer in 2006 and is now a motivational speaker.

The event, which was created to raise money for charities that help former PGA Tour players, has been described as “the first competition of its kind”.